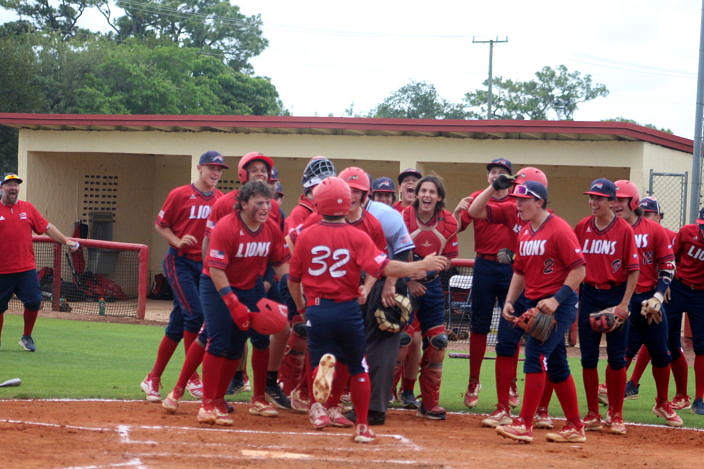 Since he started playing baseball when he was four years old, Chaminade-Madonna’s Tanner Jenkins had never hit a home run, at least not the “over-the-fence” variety.

He picked one heck of a day to get his first. And while he was at it, why not do it with the bases loaded for a grand slam!!

Never mind the fact that he hits at the bottom of the lineup in the No. 9 hole, Jenkins was as big an offensive threat as anyone on the field Tuesday afternoon and made the Bulldogs of COHEA (City of Hialeah Educational Academy) pay for it.

His bases-loaded, two out, first pitch swing of the bat off COHEA starter Randy Balciero wasn’t very high, but it was hit hard enough to just clear the left field fence in the top of the second inning to put his team up 4-0.

It was still early with a lot of baseball left to be played but the big moment stunned the COHEA dugout and lifted up the Chaminade dugout, ultimately paving the way for a big 12-4 Chaminade victory in a District 3A-14 semifinal on Tuesday afternoon at Monsignor Pace High School.

The win advances the Lions (10-14) into the 3A-14 championship game where they will take on Monsignor Pace on Thursday, May 5 at 7 p.m. at Pace High School after the Spartans took down Miami Country Day 16-1 in the other semifinal.

“I’ll be honest, today was like a dream come true for me to be able to contribute to my team’s win like this in such a big way in a big game,” said Jenkins. “When I was trotting around the bases I was thinking that I’ve never actually done this in my life, not even in Little League. I’ve been playing baseball since I was four years old and it finally happened. I may have had a couple of those inside-the-park homers but never something that actually went over the fence. To be able to actually trot around the bases was an incredible feeling. It hasn’t even hit me yet.” 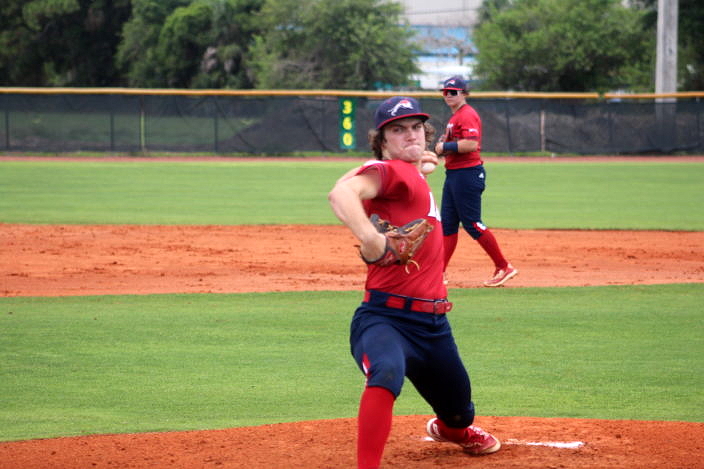 But Jenkins’ big day wasn’t over, not by a long shot. He stepped up two innings later with a runner on second and two outs and delivered an RBI single to left to put the Lions up 5-1 and scored a minute later when leadoff hitter Frank Villella doubled down the right field line to go up 6-1. He also had another infield single in the seventh that brought in another run to cap a four-run rally which ballooned the lead to 12-3 to finish the day 3-for-4 at the plate with six RBIs and three runs scored.

And for a curtain call? How bought a sparkling play in left field when he stretched out horizontally to make a diving catch of a Jonah Cardoso fly ball in the fifth inning.

“Tanner’s been setting the tone for us the last two or three weeks,” said Chaminade-Madonna manager Dan Scott. “He battled some injuries earlier in the year that kept him out of the lineup for most of the season but he’s a kid that obviously is great at putting the ball in play. He got a hold of one today and really did set the tone for us with that big swing.”

A few other Lions hitters got in on the act as well as both Joseph Billisi and Xavier Thompson hit towering drives over the left field fence as well. Billisi wound up his day a perfect 3-for-3 at the plate with three runs scored.

“We came up against a very good team in HEA today and knew they’d be ready to play,” said Billisi. “Both teams were going to bring their A game, but we just wanted it a little more and I was glad to go out there and just do my part. As far as Tanner’s slam goes, I’m not gonna lie, when I saw it come off the bat, I just thought it was a line out to left field but the ball just kept going. It was a big game changer and sparked our dugout and we took off from there.”

Chaminade’s Joseph Billisi pulls up at third base.

Chaminade starter, lefty Daniel Lipka went six innings giving up just four hits while striking out five to record the win. While Pace, ranked No. 2 in HSBN’s latest Miami-Dade power rankings, need not worry about qualifying for next week’s regional playoffs, (as their RPI points are plenty to put them in at least as a wild card entry) Chaminade will need to win on Thursday if the Lions hope to qualify for regionals for the first time since 2014.

“The kids had a good approach all day long today,” said Scott. “They were aggressive early in the count, got great swings, stayed short on the bat and didn’t really buy into trying to hit the ball in the air. Even though we hit some home runs, we hit the ball hard and hit line drives and now we’re moving on so that feels nice.”

For COHEA and manager Laz Fundora, the season may or may not be over. Even though the Bulldogs fell to 10-14-1, because of the very strong schedule they played this season (their last four games before Tuesday were against Columbus, American Heritage, Mater Lakes and Braddock), they are hovering around the bubble in that No. 8/9 area so depending on what else happens this week in other district playoff games, could still sneak in as a No. 8 seed.