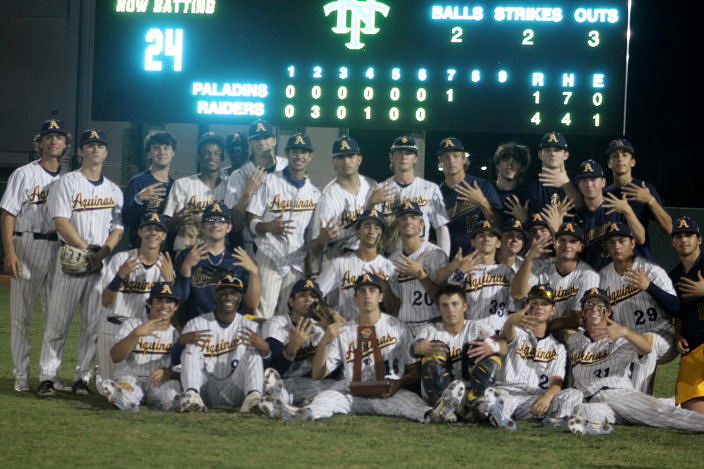 The St. Thomas Aquinas Raiders have gotten awfully used to doing this – posing with the district championship trophy for the ninth straight time.

It was another baseball reminder on Thursday night that you don’t necessarily have to outhit a team – just outscore them. And that’s exactly what St. Thomas Aquinas did.

Even though Raiders bats were relatively quiet with just four hits, they managed to take advantage of enough miscues by South Plantation to score four runs.

That was more than enough for St. Thomas starter Noah Greenseid who, despite scattering seven hits, managed to overpower South Plantation bats when he needed to by striking out 13 batters to pave the way for a 4-1 Aquinas victory in the District 6A-14 championship game at Nova High School.

After a shaky 8-6 start to the season, the win marked the 12th straight for the Raiders (20-6) who have gotten quite used to winning district titles now as it marked their ninth straight. It also locked up their 21st consecutive trip to the regional playoffs (2000 was the last time they failed to qualify) and they will now have to wait to see where the numbers fall to find out if they, or Doral Academy will enter as the No. 1 seed in Region 4-6A.

And while there were some long faces on the South Plantation side at game’s end as the Paladins were looking to win only the program’s second-ever district title and first since way back in 1980, they still took solace that their 18-6 record will be more than enough to get them into the regionals as a wild card entry.

“Noah did a great job tonight,” said St. Thomas Aquinas manager Joey Wardlow. “He started out a little rough, then cleaned it up and just settled in and came on strong. That’s what we asked him to do and he did everything he needed to do. We’ve got it going now but now we enter into a new season of win or go home. We’re working towards a plan for next week, reboot the pitchers, get some guys some rest, figure out who we’ve got next and just get back at it.”

Wardlow referred to Greenseid’s first two innings where South Plantation loaded the bases both times but both times, it came as part of a two-out rally. Greenside can thank right fielder Ryan Wolf for bailing him out of that first inning jam when Wolf made clearly the defensive play of the night. 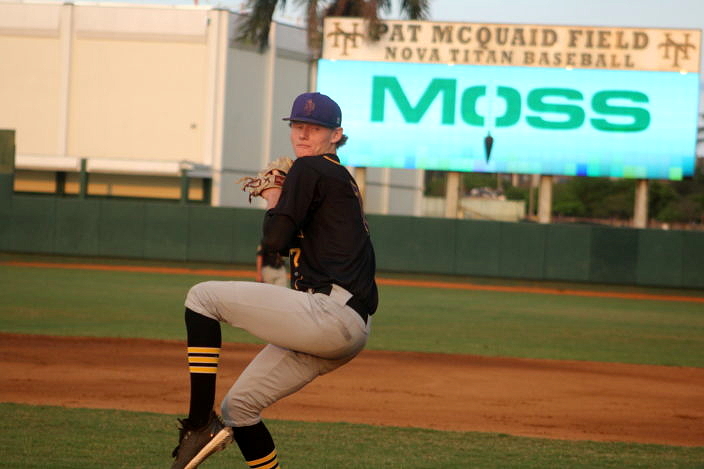 After Stephen Livingston got hit by a pitch, Jacobi James and Dylan Schwam followed with base hits to load the bases. Brady Reinhart then laced a shot that was headed to the right field corner that would’ve easily cleared the bases. But Wolf left his feet to make a diving catch to end the inning.

Greenseid then struck out A.J. Bertsch to end South Plantation’s second bases-loaded two out situation to end the second inning before settling down and retiring 13 of the next 16 batters. With a 4-0 lead, he took the mound in the seventh to try and finish out a complete game. After getting the first out, Dan Swirsky laced a base hit to right center and, with his pitch count now in the 90s, Wardlow came and got him.

Wyatt Iben came in to close things out but things went sideways at first as Bertsch singled to left leaving runners at first and second. When James hit a slow grounder to shortstop, the throw to first went wide allowing Swirsky to score and leaving runners on the corners with one out. But Iben didn’t flinch, striking out Schwam and Reinhart to end the game.

“I definitely came out a little shaky in those first two innings but just had to bare down, get comfortable out there, focus and once I did that, I got into a little groove and did what I had to do,” said Greenseid, only a junior but already committed to Notre Dame. “I just threw strikes, got ahead in the counts and when you do that, you’re going to gobble up a lot of outs. I really did want to try and finish but I knew my pitch count was up there and had all the confidence that Wyatt would get in there and get the job done.”

South Plantation starter Justin Henschel pitched well all night, a four-hitter into the sixth inning before reaching his max pitch count, but just had one bad inning that proved costly, that in the second when the Raiders got Greenseid all the runs he would need, scoring three times despite only getting one hit.

That hit was single up the middle by Wolf which followed a leadoff walk to Giovanny Adames. Henschel would go on to walk two more batters in the inning, Gunner Gulla and Jake Rappold. Adames, Wolf and Gulla all wound up scoring on one wild pitch and two passed balls.

“We really had our chance in those first two innings and weren’t able to take advantage,” said South Plantation manager Trevor Chang-Leung. “That was kind of a dagger. Then the miscues that they scored on got us in that 3-0 hole and St. Thomas is just too good of a team to hand runs to. Hats off to them, they beat us tonight but I’m still proud of our guys for not letting up and battling right down to the end.” 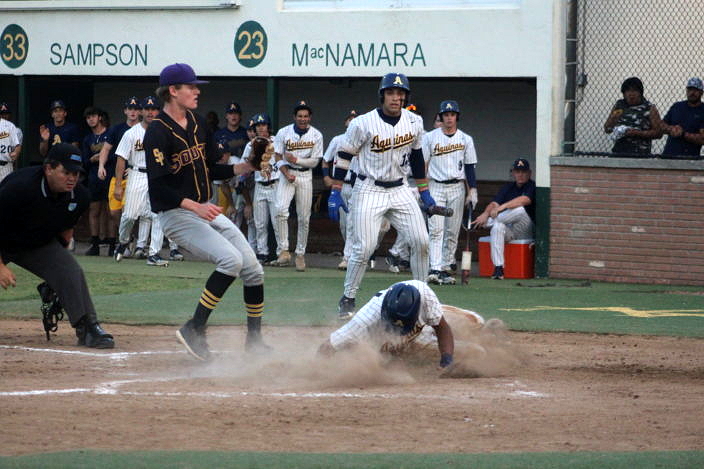 What Chang-Leung should also be proud of is the season his senior-laden team (eight of nine SP starters were seniors) put together. After going 5-16 a year ago, the Paladins probably get the award for Turnaround Team of the Year.

“All the credit goes to my coaches,” said Chang-Leung doing his best to deflect credit. “They kept the kids in the weight room last summer and fall and helped them understand what was in front of them and how good they could be. Coming off a rough year, these kids didn’t deter themselves. They put their heads in the mud and got to work and I’m proud of them.”