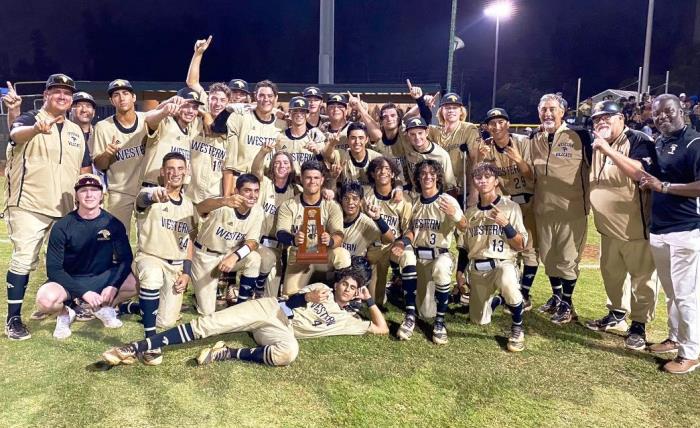 The Western Wildcats are a team that many people overlooked coming into the 2022 season. The Wildcats getting little respect was surprising, considering they advanced all the way to the regional semifinals last season.

After going 20-5 through their first 25 games, the Wildcats again put teams in 7A on notice Thursday evening, when they won the first district title in school history, 4-3 over Flanagan.

“Today’s game was a perfect illustration of the grit the team has shown all year,” said manager Onel Garcia.

Across the field from the Wildcats was their longtime nemesis, Flanagan, who is no stranger to district championship games.

Western showed early that they were not intimated, scoring two runs in the first inning, and setting the tone for the evening.

Kristian Noreiga, the teams top hitter, came into the game hitting .500. In the first inning, Noreiga launched a two-run home run, as the Wildcats dugout exploded with energy.

The score remained that way until the third. Flanagan starter Adrian Valdes settled down after the first, going four innings, and striking out 10 Wildcats along the way.

For a while, it looked like that may be good enough for a win, as the Falcons took their first lead of the game in the top of the third. Dorian Lambert led off the inning with a single, and Davian Torress tied the score at two with a blast of his own to right field.

After a hit-by-pitch, a single, and a sacrifice fly that moved Aidan McMahon to third, a groundout brought in McMahon, making the score 3-2 Flanagan.

Western would rally to tie the score in the fifth when Noriega, who had singled, came in to score.

The game would stay knotted until the 7th, setting the stage for Luis Lorenzo’s heroics. After an out, Lorenzo stepped to the plate, and when he promptly drove a 1-1 pitch out the park to left, the celebration was on for the Wildcats, who secured their first district title.

“”Luis was 0-3 with two Ks before that at-bat,” said Garcia. “But he’s always capable of getting a hold of one, and he came through with one of the biggest hits of the year. I’m very proud of him. He’s a great kid, that loves his team.”

As for the first district title ever?

“We’re proud to win the first district title ever for the school. It is an honor.”

The Wildcats will now head into the 7A regional playoffs as the second-seeded team behind only Douglas. That means Western will get their first two regional games at home, should they advance. It is likely their first round match-up will be with Southwest on Tuesday, but that will not be confirmed until Saturday morning by the state.

As for Flanagan, all was not lost. The Falcons are still in a position to secure a wlid card spot in the regional quarterfinals, which would also be on Tuesday.