Coral Springs’ Brinson The District 10-6A Player Of The Year

Written by Anthony Uttariello on May 17th, 2011 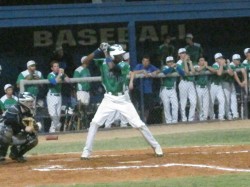 Coral Springs’ Lewis Brinson is the District 10-6A Player of the Year.

The Coral Springs Colts may have fallen short of their goals of reaching the state final four this season in class 6A, but their star center-fielder is still shining. Junior Lewis Brinson has been named the District 10-6A Player of the Year.

Brinson led the Colts both on the field and in the classroom. The Colts clean-up hitter hit .473, with four home runs and twenty-three RBIs. Showing that he is a five-tool player, Brinson also added twenty-nine runs, and was eleven-of-eleven stealing bases for Coral Springs.

Possibly the most impressive stat of Brinson’s 2010-11 campaign, was his .623 on-base percentage. Teams learned to fear and pitch around Brinson late last year, and that strategy carried over to this season. As for his contribution to the Colts, Head Coach Frank Bumbales put it in perspective.

“He leads by example,” said Bumbales, the Coach of the Year in the district. “He gives 100% on the field, and in the classroom. He’s a really special kid.”

Protecting Brinson in the Colts lineup all season was All-District first baseman Alan Sharkey. If not for his teammate, Brinson may have won player of the year honors, hitting .507, with a .590 on-base percentage. Sharkey added ten doubles and thirty RBIs to his gaudy stats. Michael Stokes of Monarch mans the other corner infield spot at third base. Stokes hit .466 for the Knights.

Behind the dish, Taravella’s Jordan Gleisher was a unanimous choice at catcher.

Brinson is joined in the outfield by another of the best dual threat center-fielders in the county. Douglas’ Louis Silverio played an outstanding center-field defensively, and was fifth in the district in hitting at .438. Silverio was also tied for the district lead in stolen bases with thirteen. Teammate Colton Bottomley use3d his power, eight home runs and twenty-nine RBIs, to punch his ticket on the all-district squad. Dylan Ebel of Coral Springs, and his .403 batting average, rounds out the outfield.

In most districts, Brandon Raaf and Greg Farber would have made the team at their positions, but with a loaded 10-6A squad, Raaf is this season’s designated hitter, and Farber picks up a utility spot. Raaf was second in the district in hitting at .475, behind only Sharkey. Farber hit .431, with an on-base percentage of .529.

On the mound, the top three regular season teams all are represented. Aaron Maller, the Colts ace, went 8-1, his only loss a regional quarter-final defeat at the hands of Park Vista. Maller’s ERA was under two for the season. Alex Kline of Coral Glades led the district in ERA, and the Eagles’ Jon Valek was also voted in as the third member of the District 10-6A mound squad.