Written by Anthony Uttariello on May 15th, 2011 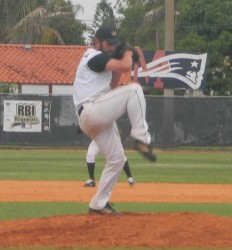 McArthur’s Tyler Henning is the District 11-6A Player of the Year.

If there was a big game to be pitched for the McArthur Mustangs this season, there was one player that Head Coach Daniel Baugh could count on every time. Tyler Henning was the Mustangs ace and go-to guy on the mound, and Henning responded almost every time. His 1.86 ERA and 7-1 record made him the Player of the Year in District 11-6A.

Right from the start of the season, it was apparent that Henning would be counted on to carry the load for McArthur on the mound. Before the season began, many Broward high school baseball fans predicted that either Piper or South Broward would be the teams to beat in District 11-6A.

Henning and his McArthur teammates put that talk to rest when they defeated both the Bengals and Bulldogs in late February and early March. Henning threw complete games in both victories, giving up only two earned runs in the process. From there, the Mavericks ace was nearly perfect, going 5-1 the rest of the season, with his only loss coming to West Broward in a regional semi-final playoff game.

As for the rest of the pitching staff on the District 11-6A team, Brandon Burgess was not far behind Henning in terms of overall numbers. Burgess struck out eighty hitters in just sixty-six innings, while walking only thirteen batters. Burgess figures to be one of the top pitchers in Broward County heading into his senior season next year. Casey Hayes, the ace of the South Broward staff until he was injured late in the year, also joins the squad.

District batting average leader Ben Osbourne led the way in the infield, hitting .481 for the Paladins. The rest of the infield spots went to Alan Arslanyan and Bryan Rath from Piper, at first and second base respectively. Arslanyan hit .453, and Rath scored twenty-two runs while stealing eight bases. Mustangs sophomore Javier Aguilar won at third base.

The outfield was represented by member of three different teams. John Kennedy led the district in stolen bases with twenty-two. Kody Jones of Plantation with six doubles, and Jake Welch from McArthur, joined Kennedy in the outfield.

Kevin Rosario is the designated hitter on this year’s squad, leading the district with his five home runs. Colby Costanzo from Piper and Josh James of South Broward contributed to their teams both offensively and on the mound, leading to their selections as utility players on the district team.

All-District Head Coach Daniel Baugh directed the Mustangs to a 14-9 record and a district title.