With The Spotlight On, District 14-1A Player Of The Year Hepple Shines Bright

Written by Anthony Uttariello on May 16th, 2011 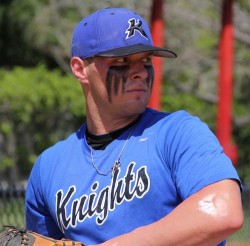 Jason Hepple played like a man amongst boys for most of the year in District 14-1A. No hitter in the entire county received the amount of respect Hepple commanded when he walked to the plate, and when teams did decide to pitch to the Highlands Christian catcher, he usually made them pay.

High school baseball players must really stand out for people to be impressed by batting average and on-base percentage numbers, and Hepple did just that. The senior hit .581, with a .710 on-base percentage, on his way to being named the District 14-1A Player of the Year.

In addition to the high average, Hepple provided plenty of power for the Knights. Highlands Christian received fourteen home runs from Hepple, to go along with forty-four RBIs and thirty-five runs.

Joining Hepple on the All-District team is younger brother Eric. The Highlands ace posted a 6-4 record, while striking out fifty-one batters. Eric also added a .346 batting average at the plate for a Knights team that came just a couple of innings from reaching the state 1A final four.

Much of the offensive fire power in District 14-1A came from Highlands Christian. Kirvin Moesquit led the district in stolen bases with twenty-three. The Knights shortstop Moesquit hit .356 on the season, with a .424 on-base percentage.

The rest of the squad from the four team district came from runner-up Sheridan Hills. The Sharks were led by senior Chris Craig. The shortstop was one of the best overall players in the district, hitting .411, scoring twenty-four runs, and fifteen stolen bases.

Ronnie Meyer added a .300 batting average and twelve stolen bases. The utility player had a 3-1-1 record on the mound for Sheridan Hills. Thomas Davis rounded out the All-District team.

One Response to “With The Spotlight On, District 14-1A Player Of The Year Hepple Shines Bright”