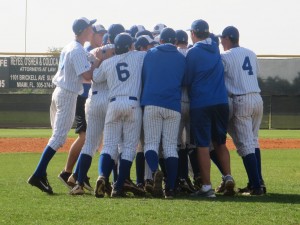 Cypress Bay players and coaches celebrate their 2-0 victory over West Broward that earned the Lightning a berth in the Class 8A regional playoffs.

Playoff baseball means teams typically dig down and find that little something extra to lift them up for the big moments.

But after the way Cypress Bay has played such passionate baseball with their hearts on their sleeves all season, it is a moment to simply keep doing what the team has been doing all year long.

It has been an emotional year for the Lightning following the passing of Manager Mike White’s wife Angie at the very start of the season.

But Wednesday afternoon at Flanagan High the team got something to celebrate, as Jeremy Tache pitched a complete-game shutout to lead Cypress Bay to a 2-0 victory over West Broward in an 8A-12 semifinal victory that clinches a berth in the state playoffs.

Before the Lightning (14-5) can get started in the 8A regional playoffs, they first have also earned a date in the district championship, where they will face top-seeded Flanagan after the Falcons won 1-0 in Wednesday’s other semifinal.

“Coach White has gone through a lot this year with the passing of his wife, and we’ve dedicated this season to her,” Tache said. “It means a lot to come out and never give up, the way he’s taught us how to do all year, and for all four years I have been here.”

Cypress Bay last qualified for the state playoffs in 2009, and this season the team flew under the radar amidst a tough district from top to bottom.

Few outside the team seemed to think the Lightning could do it, but tragedy brought the team together in solidarity with all the fuel the players would need.

“When my wife was sick and she passed away, I gave the kids the oath to never give up. She never gave up,” Coach White said. “They bought into it. From our first game of the season when we won on that walk-off, the kids just believe that every time we go out there we can win the game. They put the initials AKW on their hats, the cheer all year long has been ‘Angie’, and they have just played. It’s one of those things where the kids just never give up.”

The Bobcats (10-11) had struggled down the stretch with five straight losses, primarily due to an offense that struggled to score runs after the lineup was dealt with a rash of injuries.

Like a shark in a feeding frenzy, Tache seemed to smell blood in the water as he came out attacking and simply never let up.

Jeremy Tache pitched a complete-game shutout to lift Cypress Bay past West Broward 2-0 in the 8A-12 semifinal.

The right-hander only faced four batters over the minimum, needing just 78 total pitches to cruise to his seventh complete game on the season. The senior allowed just three hits and issued no free passes, while picking up four strikeouts to improve to 9-0 on the year.

Since the Lightning lost to the Bobcats in the district playoffs the past three seasons, Tache admitted he was hungry for a chance at some payback.

“After losing the last three years to West Broward, to be in the district championship after beating them is unreal,” Tache said. “They are the team I want to beat the most, so it feels really, really good.”

Tache was the difference-maker on the day, unleashing an arsenal of pitches while mixing up his patterns, locations and approaches to stay in command and ahead of each guy in the batter’s box.

“You can’t get in a pattern with them or else teams are going to hit you regardless of the way you’re throwing,” said Tache. “I felt if I could keep the guys off-balance I was going to have success. Ever since I was young my dad taught me to paint the corners, and as you get older you’ll throw harder. As I got older I started to throw a lot harder, and good things happen when you throw strikes.”

Tache did not allow a baserunner until the third inning when catcher Samyr Santos drilled a first-pitch fastball into left field.

Santos added a double in his second trip to the plate to go 2-for-3 on the afternoon.

As well as Tache pitched for the Lightning, Bobcats starter Michael Schappell had also been dealing for his ball club to match the effort.

The right-hander also went the distance with workmanlike efficiency, needing just 78 pitches while scattering four hits and two walks. Schappell struck out four and did not allow any earned runs, taking the tough defeat to finish the year at 1-3. 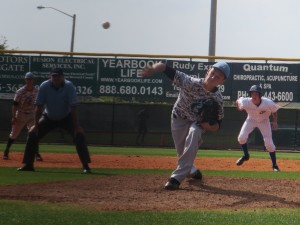 The Bobcats Michael Schappell works out of a jam, as he went the distance in the loss.

Schappell pitched well enough not only to keep his team in the game, but also to justify keeping him on the hill. He never threw more than 20 pitches in a single inning, and also needed just six pitches to get through a 1-2-3 fifth frame.

But as good as both pitchers were on the mound, if you don’t score any runs you cannot win, and the Lightning got all the runs they would need in the fourth inning.

Jay Woo reached on an error, and then went from first to third on a perfectly-executed hit-and-run play off the bat of Deigo Maceda. Joey Rodriguez then drew a walk to load the bases.

Freshman catcher Devin Ramirez followed and delivered the biggest hit of his high school career when he lined a shot into left field for a double that brought home Woo and Maceda for all the runs that Cypress Bay would need to stake its pitcher on this day.

“I don’t have anybody who stands out as superstars, but they are overachieving and they’re playing hard,” White said of his upstart ballclub. “It’s the same way at practice too. They work hard and are enthusiastic at practice. We had a great practice yesterday and it’s just carried over.”

Now the Lightning manager hopes that momentum and enthusiasm can continue to carry them in the state playoffs.

“We know we’ve got a pretty good team, and we beat some big teams this year to get a little respect back. We just want to keep playing,” said White.