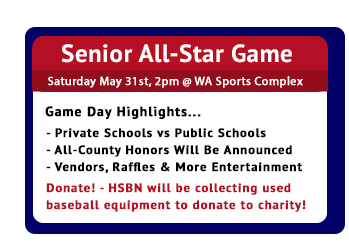 Saturday, May 31st, 2014 will be a day to remember for all players, parents, fans, and coaches here in Broward County. That is the day the county's best seniors will take the field for the 4th-annual HSBN Athlete's Dream Team Uniforms Broward Senior All-Star Game and Awards Ceremony event.

Each year since the creation of BrowardHighSchoolBaseball.com, High School Baseball Network has given seniors one last day to go out and perform in front of their family, friends, and peers. Unlike other All-Star events, HSBN has created an atmosphere and seriousness to the game that has made it among the best All-Star events in the country.

Additionally, Athlete's Dream Team Uniforms has signed on as the title sponsor for this event. For owner MaryLou Saks, it was an easy decision to sponsor the event.

"I am a sports enthusiast with a particular passion for baseball," said Saks. "The High School Baseball Network is an outstanding organization that provides players, coaches, and teams a means for the recognition of baseball excellence, spirit, comradery, and sportsmanship. I am thrilled to be partnering with HSBN, and certainly appreciate the opportunity and privilege that has been given to me."

The day will be filled with excitement and anticipation, as All-County awards, including first and second team selections, Pitcher, Hitter, Coach, and Player of the Year honors will be handed out at the game.

The game this season will return to Westminster Academy for the third straight season, and will begin at 2PM. As always, plenty of surprises are in store for fans.

Managers for the game have been selected by HSBN, and coaches who win their district Coach of the Year awards will round out the staff for each team.

HSBN Broward Public School Manager - Charlie Cardinale - Hollywood Hills
Managing the public schools team will be Hollywood Hills Manager Charlie Cardinale. The skipper has been a mainstay in Broward dugouts for over two decades, and has always taught his players how to play the game the right way. Coach Cardinale is one of the most respected coaches in South Florida.

HSBN Broward Private School Manager - Troy Cameron - St. Thomas
In the opposing dugout for the private schools team will be St. Thomas Manager Troy Cameron. The second-year manager took the Raiders to the state final four last season, and again has his squad in position to compete for a state title in 2014.

"It's an honor to be selected as the manager of the private schools in the upcoming HSBN Athlete's Dream Team Uniforms Senior All-Star Game, not only for myself, but also for St. Thomas Aquinas and the baseball program" said Cameron. "HSBN has done a tremendous job covering high school baseball in the tri-county area, so to get the chance to be part of something they are putting together, I am extremely honored and excited. Any opportunity I get to be on a baseball field and giving back just a piece of what baseball has given me, I jump on it."

The Players
Ballots will be sent out to each manager, and managers will be allowed to nominate four seniors from their team for the game. Once all ballots are returned, the HSBN staff will then review the nominations and select the final team. Approximately 30 players will be selected for each squad.

All-Star rosters will be announced on BHSB on Monday, April 28th. All players chosen will be instructed to RSVP confirming participation in the game. Those who do not RSVP in the allotted time will be replaced with alternatives.

Once the teams are complete, the players will be treated to a five-star event, beginning with commemorative jerseys with their names and numbers on the back. One mandatory practice will be held Thursday, May 29th, at which, players will receive their jerseys, meet with their fellow all-stars and coaches, and have a photo shoot in their all-star uniform.

On game day, the festivities kick off in the morning with a pregame meal for all all-star players and coaches. The meal will be followed by a traditional pregame of batting practice, stretching, warming-up, and infield-outfield. Once the first pitch ceremony and player introductions are complete, the real fun begins!

On-field games will keep the excitement high throughout the night, encouraging fan participation with raffles, trivia contests, and even on-field competitions for a few selected lucky younger fans in attendance.

The Awards
Along with All-Star ballots, coaches also will receive ballots on April 14th for All-District teams. The All-District teams are comprised of the final voting from coaches, along with HSBN representative input. All-County first and second teams will then be selected solely by the HSBN staff.

In-between each inning of the All-Star game, All-County players will be individually recognized at home plate. This will also be the time players learn whether they were a first or second-team selection. Underclassmen who receive an All-County selection will not be eligible to play in the game, but will be notified and will be invited to be a part of the awards ceremony on the field.

As all-star night draws to a conclusion, the biggest awards of the year will be presented. Hitter, Pitcher, Coach, and Player of the Year awards will be handed out.

In addition to awards received at the all-star game, the Miami Marlins have partnered with HSBN to honor all-county players from Palm Beach, Broward, and Miami-Dade on Monday, June 2nd. Players will be honored before the game in an on-field ceremony at Marlins Park. The all-county winners will then have free tickets to stay and enjoy the game! A link will be available on BHSB for parents and fans to purchase additional tickets to the Marlins game and ceremony.

Equipment Donation
HSBN will for the third year in a row be collecting used equipment and donating the equipment to area Chicago White Sox Scout Pepe Ortega. The equipment will then be shipped to the Dominican Republic, to help underprivileged ballplayers. If you have extra equipment laying around, HSBN urges you to bring it to the game and donate it to this worthy cause. If you have equipment and cannot make the game, please contact us via our contact page to arrange pick-up of the equipment.

Conclusion
Admission at the gate will be $7. No passes will be accepted for this event.

The private school team will be wearing red, and the public school team royal blue. We are asking fans to come dressed in their team colors and help create the atmosphere for this wonderful event.

It will be an afternoon that will not soon be forgotten, so mark the date, Saturday, May 31st, and come out and help send these seniors out in style, while enjoying one last baseball game for the 2013 season!
Today's Games
Latest Scores
No games today!
Scores for Saturday, April 25, 2020